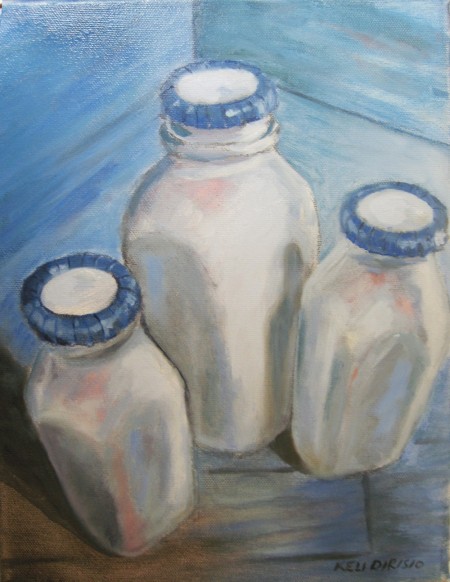 Raw milk is a passion of mine. In college I drank the cafeteria milk that came from the seemingly always full silver dispensers and had the worst digestive problems and stomach pains I had ever experienced. I did not realize what it was from until later. The milk I was drinking was powdered, skim milk and my body could not tolerate it. From that point on I had trouble with milk. At that time I was convinced that low-fat was the way to eat so I would buy low-fat or skim milk. I would be doubled over in pain within twenty minutes of drinking it. I began to avoid milk. When my first daughter was weaned and began drinking milk, she experienced stomach discomfort so I assumed she was lactose intolerant and changed her over to soy milk. After extensive research into unfermented soy I did not feel it was the healthiest option for our family so we stopped consuming it. I came across some information about grass-fed, organic raw milk and the health benefits of not pasteurizing or homogenizing it. We decided to give it a try. Much to my surprise, neither I nor my daughter had any digestive issues when drinking raw milk! We were hooked! When friends and family heard that we were drinking unpasteurized milk they were concerned for our safety. They were worried that we would get sick from all the bacteria in the milk. After all, the reason pasteurization exists is so that we will not get a food-borne illness. After showing them existing research that demonstrates that one is more likely to get sick from pasteurized milk than from raw, most of them were convinced that raw milk is the way to go.

Conventional milk goes through quite an extensive process to get it from farm to table. The cows are confined to crowded pens, fed grains and are rarely given grass to eat. They are routinely injected with hormones to increase milk supply and antibiotics so that they won’t get sick. These chemicals get into the milk and into the consumer. The processes of pasteurization and homogenization change the chemical makeup of the milk. Heating the milk destroys the enzymes making it more difficult to digest. Most people diagnosed lactose intolerant are in reality reacting to the denatured milk void of necessary enzymes. It also damages the proteins and diminishes vitamin potency. Synthetic vitamins and minerals are added to conventional milk to replace those destroyed. Homogenization is the process that mixes the milkfat into the milk so that it cannot separate and float to the top. To accomplish this, the milk is extruded through small holes with use of extreme pressure to break up the fat globules. It also undergoes additional heating and high temperatures with can further alter nutrition content. Milk in its raw state contains an enzyme called xanthine oxidase or XO. This enzyme is mutated during homogenization and is linked to heart disease. 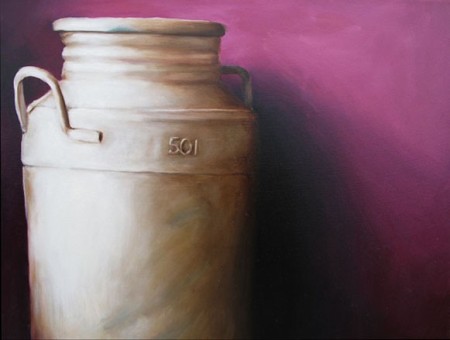 In sharp contrast, grass-fed, organic cows are allowed to roam in large pastures with plenty of grass to eat and fresh air. If you have ever been to a family farm you know this to be true. There are fewer numbers of cows on these farms and they are taken care of properly with natural medicines and proper food. Cows are ruminants. They have four stomachs and chew their cud. They are meant to eat grass, not grain. When a cow eats too much grain, her body becomes more acidic which affects digestion and milk composition. They friendly bacteria in the gut are diminished thus making her more prone to illness.

Raw milk is a complete food and contains all eight amino acids. It is a healing food and has been known to help prevent or lessen the instance of allergies, asthma, and ear infections. There are also over sixty enzymes present in raw milk aiding digestion and protecting the milk from bacteria. Probiotics in the milk also prevent harmful pathogens. Conjugated linolic acid (known as CLA and also in breastmilk) is plentiful in raw milk. It is an Omega 6 fatty acid that aids in strengthening the immune system and lowering food allergy reactions. No vitamins or minerals need to be added to raw milk. The milk literally goes from the farm straight to your table. There is a recent study that suggests that raw milk from older breeds such as Jersey of Guernsey cows are more healthful because of something called the A1/A2 Factor. This is something that definitely warrants further study.

There are so many benefits to raw milk and so much more information about it that I suggest delving further into the subject using the resources listed at the end of this post. Where you get your milk is very important. Know your farmer and the farm. Know the breed of cow and what they are fed. It is wise to be informed so that you can make an educated decision about raw milk.

The Devil in the Milk http://thebovine.wordpress.com/2009/03/20/the-devil-in-the-milk-dr-thomas-cowan-on-how-a2-milk-is-the-answer-to-the-mystery-of-why-even-raw-milk-sometimes-does-not-seem-to-be-enough-of-an-improvement-over-store-bought/

Sarah Outlaw is a work-at-home wife and mother of 3 who is passionate about natural living, natural medicine, and real food. She is the owner of 90210 Organics, an Eco-boutique, and is a Certified Health Coach & Natural Living Consultant.

This entry was posted on Thursday, March 3rd, 2011 at 6:11 pm and is filed under Uncategorized. You can follow any responses to this entry through the RSS 2.0 feed. You can leave a response, or trackback from your own site.